Mary and John have been married for 15 years.
They are both 42 years old, have 1 dependent child, and have decided to get divorced and divide the assets equally.  Here is the summary of how they decide to divide the assets.

Since Mary has primarily stayed home to tend to their children, John will pay $1,450 per month in alimony for 5 years and $550 per month in child support. Mary earns $24,000 a year and John earns $92,000 per year.  The chart below shows the outcome of this scenario over the next 20 years. 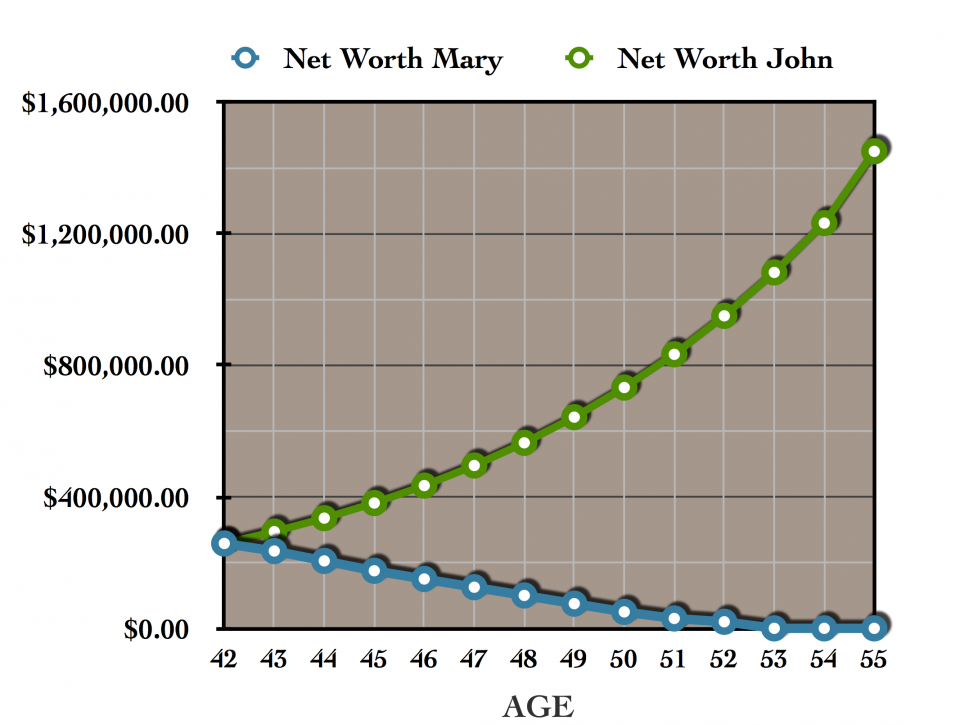 Mary’s assets are totally depleted(the cash, 401k and the house) while John has more assets than ever.

All too often, settlements end in a mathematically equal property division which appear fair on the surface (as referenced in the Asset Division table above).  The lower wage-earning spouse is commonly forced to deplete their savings and sell their house just to get by.

After increasing alimony to $2,000 per month and lasting for the term of their marriage (15 years), we come out with a scenario that looks like the chart below. John’s net worth still increases over time, but Mary doesn’t have to deplete her accounts and sell the house just to survive.

Although Mary doesn’t have to deplete her accounts to survive, you can see how different John’s net worth is from Mary’s.  What many people fail to realize is that different asset types have different growth rates.  Since Mary took the house, the large majority of her net worth isn’t growing anywhere near as fast as John’s 401k which can be invested more aggressively.  Let’s look at another settlement option which has a more equitable long term result.

In this scenario we have decided to keep the increased and extended alimony but we are taking a different approach to dividing the assets.  In this scenario Mary and John have decided to sell the house and divide the equity evenly.  This allows the pair to divide all the assets in the Asset Division table on a 50/50 basis.  This means Mary has a larger portion of the 401k (which has a higher growth rate); the result being a more equitable division of the assets in the long-term. 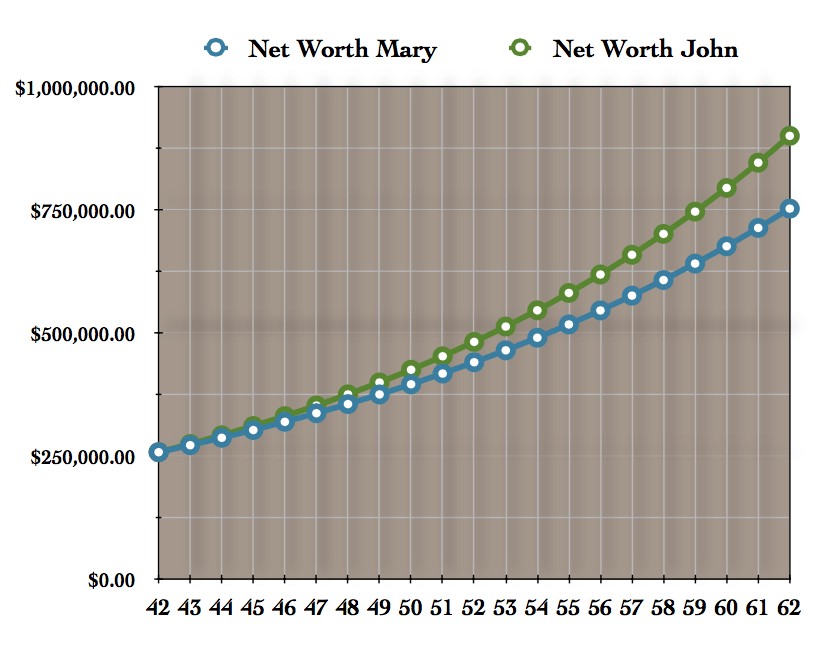 Don’t be comfortable with equal numbers. Understand how the proposal affects you in the long-term before agreeing to any settlement. Are you overlooking an important variable in your divorce? Contact Utah Divorce Planning to schedule a consultation.

The case study results are for illustrative purposes only and should not be deemed a representation of past or future results. The example does not represent any specific product, nor does it reflect other expenses that may be required. No representation is made as to the accurateness of the analysis.  The example above is hypothetical in nature and is not intended to be a recommendation of any strategy.

Email Us A Question